skip to main | skip to sidebar

This was a cool show punk legends at the Wicked Shamrock, SP&C local ska-punk kicked it off with and played a good set with song range from fast to slow these guys have been at for somewhere around 10 years now! Meth Leppard was next they played a few new songs as well as the older stuff once again these guys play loud, heavy, in your face metal,punk, rock and whatever the else they feel like doing!!
Radio Grenade was next they played there set alot faster than normal i know they didnt have much time, its good to see that they can kick it up a notch!! The Adolescents were next they were really good and played almost all the favorites there was a pit for there whole set!!! Over all this show was pretty fun and everyone seemed to have a blast...Once again good times, good friends!!!
Posted by Records On Tap at 2:25 PM No comments:

Dont miss this one!!! 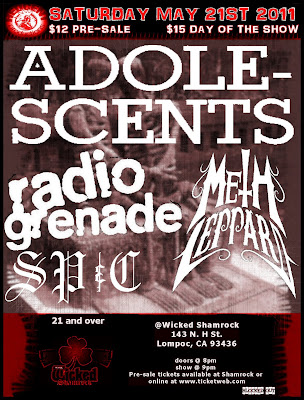 Posted by Records On Tap at 1:19 PM No comments:

Added some shows to the calenar check it out!!!!
http://www.recordsontap.com/CALENDAR2.html
Posted by Records On Tap at 2:17 PM No comments:

Records On Tap
Records On Tap is a very small label if we ever sign a band or two they will be PUNK bands, well punk bands I like.

Links- Check them out!